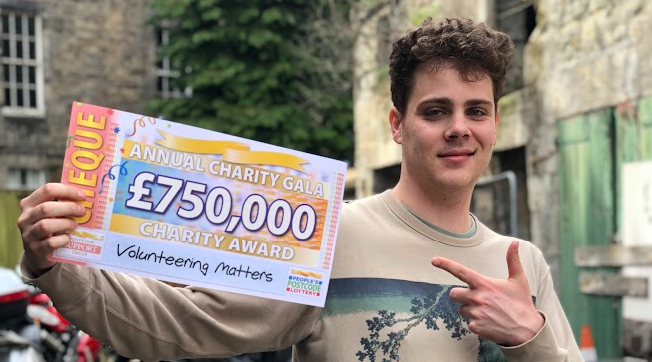 ‘Full-Time Volunteering is a big commitment. Volunteers give up 6 months to a year of their time to travel a long way from their homes and their families to participate in a volunteering project with strangers. There are often cultural and language barriers that need to be navigated, and the work that they do might be challenging. Despite this, many volunteers continue to journey to the UK, excited and eager to participate in a Full-Time Volunteering (FTV) project.

When I started my volunteering journey in February, I was already based in Scotland, in a place and culture I was familiar with. My goals for the placement, and what I get out of it, might be different than a volunteer moving to the UK for the first time for the sole purpose of volunteering.

We all have our own reasons for volunteering. For me it was an eagerness to learn new skills. For others, it could be a commitment to service or a joy for travel and experiencing new cultures. Our goals might also change and develop over the course of our placements. I went into my placement expecting that the work I would do would mostly be in the service of others, but it has also helped me focus on self-improvement.

Despite starting from various places, something we all have in common is that the experiences we have during our projects will have a lasting impact on us, and we can also have a lasting impact on the people we make connections with. No one understands this better than the FTV project managers that support us volunteers and help manage the projects that we are working on. I had the opportunity to speak with several current and former FTV project managers who have a unique insight into the experiences volunteers have and often develop close friendships that can outlast their volunteering placements.

It isn’t uncommon for volunteers to experience amazing feats of personal growth during their placements. Often up to chance, meeting just the right person can be the impetuous for this growth. Pam Robinson, who was a Volunteer Manager for the FTV North Region, recalls “Over the two years I worked with lots of inspiring and wonderful young people. A volunteer of mine that stands out was Diana who volunteered in Halifax. Her role was quite complex and challenging. She was supporting a young woman who had physical disabilities who was also hearing impaired. This young woman was very active in disabilities policy and rights work. Diana used to support her in her work and over the duration of her volunteering became very fluent in BSL. She went above and beyond for her efforts and was nominated and won the FTV volunteer of the year award.”

It’s not only personal growth that Pam remembers. One challenge that many volunteers face is isolation and lack of a built-in social circle. “Many of the volunteers were volunteering alone on projects and may not have had others in the same city. I would organize social days occasionally in a central location in the region. The volunteers might not have met each other before, but from the word go they developed these amazing friendships that lasted for the whole duration of their project and probably beyond. I loved the way the FTVs would make the most of their breaks. They were great at finding cheap travel deals across Europe and took some amazing trips. The overall thing I took away from FTV was the camaraderie of the volunteers.”

It isn’t just friendships between FTVs that can outlast the duration of our projects. Volunteer managers and volunteers often developed long-lasting friendships as a result of the experiences they shared. Jen Finnimore, who was an engagement manager for FTV in Scotland, has maintained a strong relationship with one of her first volunteers.

“One of our volunteers that was here when I first started, whose name is Mika, volunteered with Share Scotland, which supports people with physical and learning disabilities in a group home setting. She continues to work for them now and she just turned 29, which makes me feel old because she was young when she came and volunteered with us. She is from Germany originally but loved it so much that she has come back to work for the organization. With Share Scotland we’ve worked with them for nearly 30 years and several of our volunteers go back and visit people working on the project. It’s nice to hear stories of volunteers that have moved onto other great things. Some are pursuing their Masters; others have gone into care work.”

Another volunteer that Jen managed has left a huge lasting impact on one of the service users they worked with. “One of my other volunteers, Helena, who was also German, worked on one of my projects which supports people with learning disabilities. They are a very active project and the tenants they support have strong social lives. Of her own volition, Helena started teaching German to one of the tenants. When she left, the next German volunteer continued where she left off. Several volunteers have carried on their efforts over the last seven years and now he speaks quite decent German. It was nice that they took the effort to share that skill with him.”

Farhana Akthar, who was a Volunteer Manager with FTV, recalls that she “built some good relationships with the partners and volunteers to the point where when I go back again the following time, those volunteers that have returned to their home country become like friends, get in touch with me and show me around the place. It’s nice building those relationships. Its not just work relationships, they do sometimes turn into friendships afterwards. That’s one thing that always stood out in my role was travelling and getting to meet people from diverse cultures.”

Farhana describes her role as a Volunteer Manager with FTV as “Being responsible for conducting the interviews of the volunteers. As part of that I would go abroad to countries like South Korea, Columbia and Germany and interview potential volunteers from there. I would go to these countries and do a presentation about Full-time Volunteering to the partners, and they would have potential volunteers that would come and listen. Then I would interview at least 20-25 people over the course of a week or so.”

Personal growth isn’t just exclusive to the volunteers. Farhana recognizes the role her early experiences with FTV had in helping her gain confidence in herself and her professional abilities. Before her first work trip to Colombia, she wasn’t sure what to expect or how to feel. “Going to Columbia was a unique experience. I wasn’t sure what to expect as a person of colour and wearing hijab. I found it interesting that everyone was very curious and often stared at me. It wasn’t in a negative way though; people were always nice to me.”

When it came to fulfilling her role for FTV in Colombia, Farhana describes how she wasn’t sure how comfortable she was going to be speaking in front of a large group of people. “My manager told me ‘They are only going to know what you tell them so if you make a mistake they won’t realize.’ I still remember when I was trying to say people’s names, I didn’t realize that in Spanish the J is silent and I struggled to pronounce names like Javier. Little things like that I learned along the way. Once I finished the first presentation and the volunteers were all asking me questions and I had it under control, I came away with a realization about myself that I do enjoy talking in crowds and feel confident doing so. That experience helped build my confidence. Not just in traveling alone but also in day-to-day communication and my self-esteem. That’s one part of the job that has helped build my character”.

Full-Time Volunteers are with their projects for a relatively short amount of time. Despite this, the experiences we have and the relationships we build are bound to have an impact on us and the people around us. Volunteers, service users and FTV staff alike have come out of FTV knowing more about themselves and the people they have connected with. These long-lasting impacts, both as individuals and as a group, are what make FTV such a special experience for those of us who are lucky enough to be involved.

Reflecting on my volunteering experience as it comes to a close, I can honestly say that I have come out the other end different to how I started. My colleagues that I was lucky enough to speak to about their experiences with FTV also look back fondly on the things they learned along the way and how they grew as people alongside the volunteers and the organization.  Reflecting on the 60th anniversary of the programme, Pam highlights that “Over the past 60 years Volunteering Matters has adapted to the needs of the communities that we serve and is leading the way in developing and supporting innovative volunteer programs. I’m grateful to be a part of such a forward-thinking organization.”

After 60 great years of Full-Time Volunteering, I want to give a big thank you to all of the volunteers, support staff and beneficiaries that have made this wonderful program what it is today.’

What does a Full-Time Volunteer actually do?