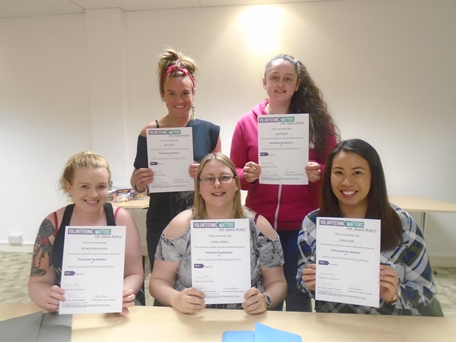 ‘I became involved with Volunteering Matters in January 2016. I had applied to study Social Services at college and wanted to gain some experience working with young people before the course started. I had looked online for local organisations and came across the Volunteering Matters web page. I called that day and was then invited to meet with staff to discuss my hopes and what I could offer, and I was accepted as a potential befriender for the North Lanarkshire Befriending Project. I attended the training which gave me a great insight into what was expected of me as a befriender, and also some of the issues some of the young people were experiencing. It was also very informative and I felt well-prepared and excited to get started.

I met with my young person at the end of July and we discussed her likes and dislikes, then agreed on the first outin 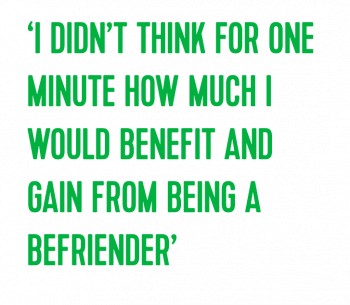 g and organised a date and time. Initially this was nerve wracking because this was something out with my comfort zone. My young person was also nervous at the initial meeting however when we met for our first outing the nerves were gone and we both had a great time and chatted non-stop.

My young person came across as confident but deep down she struggled with self-belief and confidence. However, throughout our time together she has grown from a young girl into a young woman and this was lovely to see. We participated in activities that promoted her skills and allowed her to grow in different ways, especially with her self-belief. I also encouraged her to take part in a residential trip organised by North Lanarkshire Befriending, where she was given the responsibility of helping with some younger children. This really helped her believe her worth as an individual – she now offers to help out whenever there is an activity and really shines when she is helping others. This has encouraged her to follow her dreams of a career in childcare, and she now has the belief she can do this.

Throughout our time together my young person’s home situation changed and circumstances meant she had to be moved into a supported accommodation unit. Initially this was extremely upsetting for her. She was studying for her exams, was already emotionally vulnerable and had never lived on her own. Through working together and taking advantage of our outings, I was able to support her with food shopping, budgeting and assisting her with basic housekeeping skills. Not only did this help her but it also helped me gain more skills and allowed me to put theory into practice by promoting independence and offering a support net – not only from myself but from the befriending project too.

Both Arlaine and Ross (project managers) are fantastic! Their support is second to none and I believe this has contributed greatly to not only my development and growth but to my young person too. Being able to see her hold down her own home in the community whilst still attending school and growing every day into a beautiful, confident and motivated young woman makes everything I’ve done and been involved in with befriending extremely worthwhile.

I originally thought as a befriender I was there just to give my young person time out from their family life and to allow them to have some fun whilst also helping them make positive choices going forward in their lives. I didn’t think for one minute how much I would benefit and gain from being a befriender. I have gained so much confidence not only in a physical sense but also verbally as I now no longer fear speaking out in large group settings which came from my involvement with Volunteering Matters group activities such as cooking nights, games nights and the Christmas outing. I have established new skills which I know will continue to help me grow as I move on through my studies and eventually into my career within social services. I have loved my time as a befriender and loved being part of such a fantastic, positive and rewarding project. I hope to continue on with the project for a very long time!’

Evelyn was honoured at the Royal Garden Party at Holyrood Palace along with volunteers from other projects in July 2018! Read about the day here.